We start with the weather, but that helps us to understand how the real greenhouse effect works. 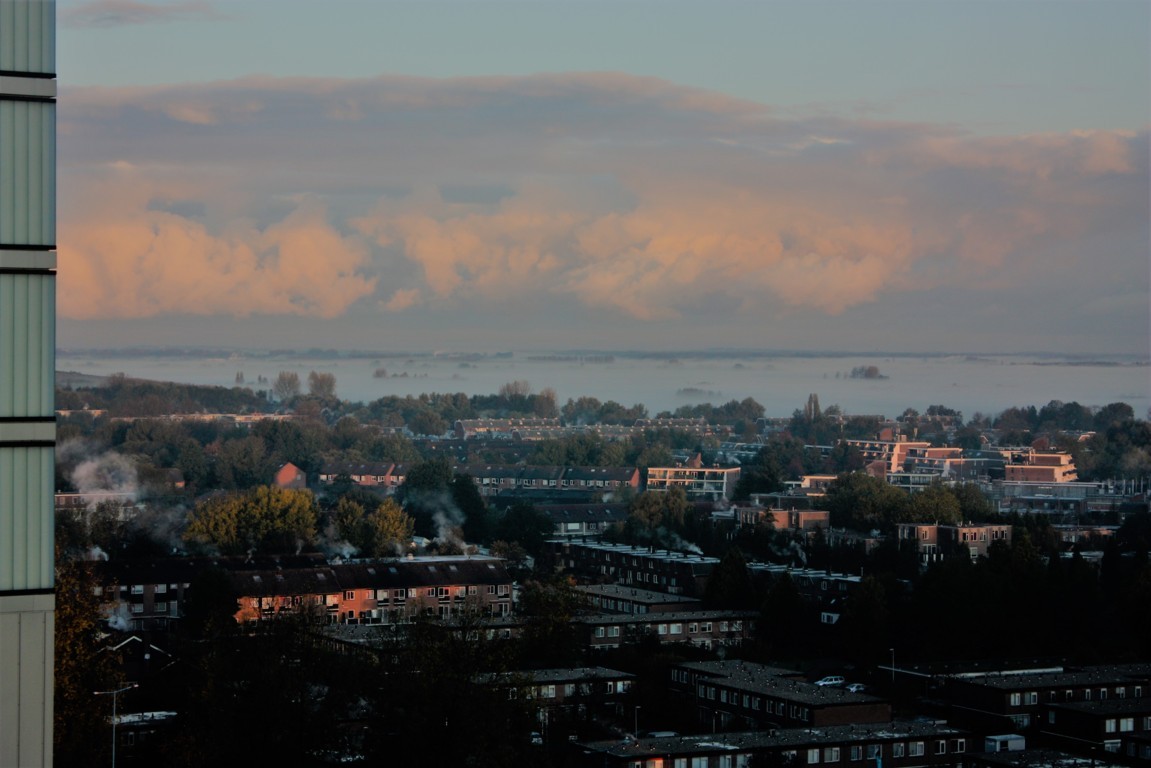 I took this photo many years ago on a cold morning at the end of September, the beginning of autumn, the trees were still green. When asked if there is something strange going on here, I am still waiting for the right answer. No idea? Meteorologically speaking, this is not possible – at least at first sight. But what is not possible? and obviously, why is it possible anyway?

We see a thin layer of fog over the farmlands. This indicates a very cold layer of air at the Earth surface that has cooled down at night by contact with the radiating soil, but also by radiation to the ground (indeed, it’s that greenhouse effect). This causes condensation and fog to form. This is called a ground inversion. The cold and therefore relatively heavy air on the surface apparently cannot mix with the warmer and therefore lighter air above it. So this is a stable situation that can be very persistent until it finally disappears due to the heat of the solar radiation

Behind it we see cumulus clouds light up in the sunrise. These clouds are created by heating the air on the ground, making it relatively lighter in relation to the environment and causing it to rise. As it ascends, it cools adiabatically, also causing condensation with shapes reminiscent of cauliflower or clouds of smoke, as it is subject to similar turbulence movements. We call this convection, except glider pilots, they call it thermals.

But how can the earth’s surface be simultaneously very cold and cause an inversion, but also so warm that it causes thermals and cumulus clouds? The answer to that contradiction is the still warm North Sea; which is behind it, pun intended. It does not cool down that quickly after a warm summer with such a first frost and therefore the air above it is also warmer.

And in these observations is the most important part of how the atmosphere works, cooling inversion and warming convection. How does that relate to the third element, the greenhouse effect?

Greenhouse effect has something to do with (electromagnetic) radiation. Heat and radiation are actually different forms of energy, which alternate, heat causes radiation and radiation causes heat. How much? This is regulated in Stefan Boltzmann’s law for the quantity and Planck’s law for the frequency band, in other words, the wavelength of the radiation. This can be infrared (longer waves), or visible light (shorter waves) at extreme temperatures on the sun or in the light bulb. Greenhouse gases such as water vapor and carbon dioxide have the ability to do that exchange of heat and radiation at the usual temperatures on Earth. The oxygen and nitrogen in the air can of course also radiate, but that is in the wrong frequency range that does not correspond to the temperatures on earth.

Now to see what that greenhouse effect does in the atmosphere, we should actually take that away. What happens to an imaginary earth with all the trimmings, except for those greenhouse gases and therefore also without water vapor, ergo also without water? It would then be more like the moon, but with a 24-hour day-night cycle and an atmosphere of mainly nitrogen and oxygen.

Now we bring in the sun, which irradiates the earth with the energy “flux” of about 1360 watts per square meter, mainly in the visible light area of ​​the electromagnetic radiation. According to Stefan Boltzmann’s law, this implies temperatures above the boiling point of water. However, part of that radiation is absorbed by the atmosphere, and part is reflected by the earth’s surface. But what remains, the radiation absorbed by the ground surface, is still good for about eighty-ninety degrees Celcius, directly below the zenith, where the sun is perpendicular to the earth. Not too unlikely when you recall the Sahara’s desert heat, or the maximum temperature of the moon (127 degrees Celsius).

And then there is that atmosphere, which is heated by contact with the surface. As a result of which it expands, becomes lighter and takes off, convection, just like that first picture above the warm North Sea. There will only be no cumulus clouds because we had removed all the water. But that does not alter the fact that some of the radiant energy from the sun eventually finds its way as heat energy in the higher parts of the atmosphere.

What happens in places where the sun doesn’t shine? The dark side of the Earth, the night? The earth out radiates the energy, which cools it down, much like in the first picture; and also significantly so,  because there are no greenhouse gases that absorb the radiation and partly reradiate back to slow down the cooling. The lower molecules of the atmosphere in contact with the earth, the boundary layer, also cool down, making this air layer heavier, creating the inversion. And not unlike in that picture, that cool air remains close to the earth and will not mix with the layers above it. How then should the higher atmosphere cool down,  losing its heat energy? By out radiating? Normally yes, but only with the help of those greenhouse gases, which are not there at the moment.  After all, had we had taken that away. There are no other ways to lose heat energy. The universe simply has no molecules to transfer heat to with conduction. To our utter amazement, we must conclude that the atmosphere at night cannot release its heat energy and therefore cannot cool down without greenhouse gases.

We have seen that heat energy enters the atmosphere from the earth’s surface by convection and comes out again by radiation through the greenhouse effect. Hence the conclusion is inevitable that the atmosphere of the earth will warm up strongly without greenhouse gases. The main function of these gasses is to limit the warming of the atmosphere. Hence it is also clear that that widespread conception of 33-degree Celcius greenhouse effect is false and misleading, based on incorrect assumptions and incorrect simplifications.

Without greenhouse gases it gets hot and that is the real greenhouse effect: cooling of the atmosphere.