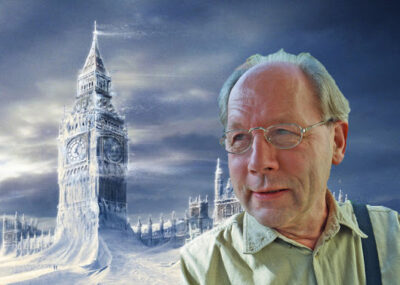 Abstract
The Anthropogenic climate change hypothesis has its roots in the climate reconstructions based on the ice core records of Antarctica and Greenland. Isotope ratios of oxygen and hydrogen in the ice are assumed to be proxies for global temperature. However, if we zoom in on specific periods, for instance the so called “mystery interval”, we find abundant evidence that does not support that hypothesis. This blog elaborates on this issue, and demonstrates that it’s essential to revisit the ice age theories, which will be subject of subsequent blogs. 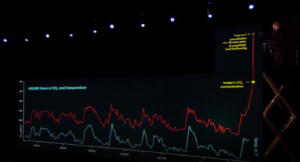 Introduction
The Anthropogenic Global Warming (AGW) hypothesis began to gain weight with the polar ice core research. Over three kilometer deep narrow borehole cores were drawn from the ice sheets of Greenland and Antarctica and analyzed on chemical and physical properties like carbon dioxide and methane in gas bubbles and isotope ratios of hydrogen and oxygen of the ice, thought to represent temperatures of the past ice ages. It was concluded that there was a very high correlation between those carbon dioxide and isotope ratios between cold periods of advancing ice, and apparent warmer intermezzo’s, the interglacials.
And that was it: the onset of the AGW hypothesis, as famously illustrated by Al Gore on his scissors lift in an inconvenient truth (fig 1).

Discussion
The meaning of these graphs is totally dependent on the correct interpretation of the data and the correctness of the assumptions about the relationship between these isotopes in the ice and the temperatures.

We now zoom in on a specific period in that era, between 20,000 and 13,000 years ago as the world came out of the last glacial maximum (fig 2) looking at both proxy reconstructions of the Greenland temperature  (Alley 2004) and Antarctic temperature  (Jouzel et al 2007) based on isotope ratios in the ice cores (the isotope thermometer).

Apparently Antarctica came out of the ice age gradually between 17.5 and 14 thousand years, while Greenland appeared to linger on in the freeze until a sudden warming spike some 14.5 thousand years ago, a.k.a. the Bølling-event. How to deal with this mismatch? We start off calling it a mystery; it’s the mystery interval (Denton et al 2006).
Obviously this mismatch has been a source for numerous speculations and discussions and there are several options to consider:

To judge the first hypothesis, we can investigate other hemispheric records of that time to see if we can learn more about temperatures. We find for instance:

Denton et al 2006 assume the cause for the mystery interval to be hyper cold winters, yet, massive retreat of glaciers on the Northern hemisphere. They propose that a massive ice berg discharge from North America, known as Heinrich Event H1, effectively shut down the Thermohaline Current. This would have caused a very cold arctic environment, while temperatures on lower latitudes could have been remained higher. However, if extensive winter sea ice is dominating the Arctic sea, then it certainly has its impact on the Arctic continent, eg Siberia. Hence we must find the same hyper-cold conditions back in the period 17,500-14,500 years before present.

Hubberten et al 2004 summarizes the results of studies of the Late Weichselian periglacial environment of Northern Eurasia and finds from multiple proxies a remarkable warming around radiocarbon dated period starting at 15000 years, which must be calibrated to about 18700 calendar years before present[1].  For instance, using insect assemblages in the area of the Laptev sea (fig6 pp1339, see below), they define the “warmest tundra steppe” between about 10 and 15 thousand radiocarbon years ago (calibrated to 11.2-18.7 thousand calendar years ago) with a dramatic increase of xerophilous (=warmth loving) insects from an average <20% to a 60-70% spike around 14 thousand radiocarbon years, calibrated to 15.7 thousand calendar years ago. It may be noted that the Northern Hemisphere summer insolation at that time was halfway the transition from a minimum around 22-23 thousand years ago to a maximum around 9-10 thousand calendar ago, which would not suffice to explain the unusually high temperatures. It may be clear that extensive sea ice in the Laptev sea would not concur with these results.

Extensive sea ice is furthermore not compatible with the results of Lagerklint & Wright (1999) using high-resolution faunal, isotopic, and sedimentologic data from a North Atlantic core to show that sea-surface temperatures increased from 17.5 to 17.3 thousand years ago but also contend that during Heinrich event HE1, the sea surface temperature decreased again. Denton et al suggested that the Mediteranian sea was also unusually cold however Carboni et al (2005) investigate the ratio of plancktonic cold and warm taxa in the Tyrrhenian Sea, and find warming already at 16,3 thousand radiocarbon years and progressing climate fluctuations as of 15.0 thousand radiocarbon years ago which converts to 19.0 and 17.7 calendar years before present.

Hill et al (2006) find also indications of early deglacial warmth two thousand years before the formal termination and remark that those findings “are consistent with a growing number of records from around the globe that exhibit pre-Bølling warming prior to Termination IA, and extends the record of such processes to the northern Pacific Discussion”.

The conclusion must be that the records do not support the hypothesis of Denton et al (2006), which attempts to explain the contradictions in the records of the mystery interval with still very cold conditions. The Northern hemisphere did warm up including the Arctic region, despite the cold indications of the isotope thermometer. That means that the first hypothesis can be considered falsified.

So the question is now if the isotope anomaly of Greenland is a local effect due to large changes in the water cycle and weather (hypothesis two), or if the isotope paleo-thermometer is just not working at all. After all, the melting of the Laurentide ice sheet must have produced a lot of light water isotopes, contaminating the normal isotope ratios. For this we would like to have other isotope reconstructions originating farther away from Greenland, to see if these are more a match for Antarctica, and those are available in speleothems (stalagmites and stalactites) and oceanic sediments much further away from Greenland.

So if the second hypothesis is correct, then the typical lack of increase of the record before the Bølling event and then the sudden spike should only be visible near Greenland. However, it’s around in some format practically everywhere. To name a few: in the speleothems of China (Wang et al 2001), Turkey (Fleitman et al 2009), in the sediment cores of the Atlantic ie Cariaco basin (Hughen et al 1998), the Pacific (Kennett and Ventz 1995) and even close to Antarctica (Andersen et al 2009, Zhang et al 2016). Consequently the Bølling event was not restricted to the region of Greenland. It can be traced back in some form at numerous places. Scholars assume the origin might be oceanic (Broecker & Putnam 2012). But that’s a subject for another blog later.

Conclusion
Greenland’s paleo-thermometer of the ice cores suggests that Greenland came out of the deep cold of the Last Glacial Maximum suddenly at the onset of the Bølling event around 14.5 thousand years before present, while Antarctica’s warming was initiated much earlier around 17.5 thousand years ago. However, multiple other records show widespread pre-Bølling warming, while the typical Bølling spike is visible in many records around the globe. Consequently neither the first hypothesis about the temperature split, nor the second hypothesis about local disturbance at Greenland can be correct. Hence the isotopes in the ice cores of Greenland are not a reliable proxy for temperatures, challenging the theories about the Pleistocene ice ages.

[1] Due to  multiple complications, like changing ratios of radiocarbon concentrations in the CO2 of the atmosphere,  the radiocarbon dating requires calibration, by comparinjg with other records. Reimer et al 2013